Dedicated to the Study and Treatment of Personality Disorders

The Center for Transference-Focused Psychotherapy

Borderline personality disorder (BPD) is a chronic, multi-symptomatic, and debilitating psychiatric condition that affects, according to studies, beween two and six out of every 100 individuals. This condition is more prevalent than schizophrenia, bipolar illness, and autism combined. These individuals suffer from intense mood swings including depression and anxiety. They have difficulty relating to people, both in employment and in their family and intimate relations. They do not trust other people, and in relating to others often lose control of their emotions and exhibit emotional outbursts of anger and disagreement. Individuals with this disorder in the early adult years of 20 to 30 often have suicide attempts. Approximately 10% of individuals with this disorder end their lives in suicide. As these individuals age, the more dramatic symptoms of the disorder often decrease but without treatment they often become isolated and depressed individuals without successful work and relationship histories.

Our clinical research group began in 1980 to develop a treatment for these patients that had the goal of not only reducing suicidal behavior and symptoms of anxiety and depression, but also to assist these patients in their relations with people in work and in intimate relations. In order to achieve these goals, we found that the treatment must focus not only on observable behavior in these individuals, but also on how they think about themselves and other people.

With financial backing from multiple sources including the National Institute of Mental Health (NIMH), foundation grants, and generous support from our department of psychiatry and our chairman, Dr. Jack Barchas, we were able to develop this treatment and describe it in major scholarly publications. In a major randomized control trial (RCT) of our treatment, called Transference-Focused Psychotherapy (TFP), we were able to show that it was better than a standard cognitive-behavioral treatment, and better than a structured supportive treatment. We also found that TFP not only reduced symptoms but helped these patients change the way they think about themselves and others. In the treatment setting, patients experience the full range of their intense emotions, including disruptive affects and affect storms with the help of the therapist, patients examine their impulsive and distorted thinking in these situations and become able to modify and control outbursts of anger and other emotions. In this way patients improve both their sense of self and their crucial relationships with others in the important areas of work and intimate relations. 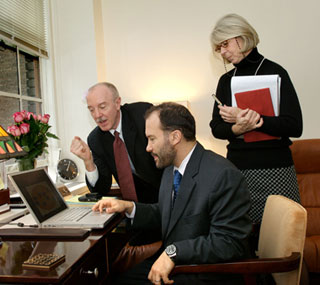 As the scientific tools advance allowing us to examine the genetic backgrounds of patients and to examine brain functioning as it is occurring with functional magnetic imaging, it is now possible to further our knowledge of borderline pathology by putting together the picture of the genetic and early environment of these patients, and to examine brain functioning relating to the inability of these patients to modulate and regulate their emotional reactions especially in their interactions with other people. In our laboratory, we have found, for instance, that borderline patients as compared to normal individuals have an abnormal pattern in their brain as they try to digest and modulate negative affect. Instead of processing the negative stimuli with cognitive controls in the prefrontal cortex, the borderline patients over react with emotional response in the emotional centers of the brain, and fail to modulate this response in the prefrontal cortex. This question before us now is how psychotherapy with adjunctive medication can better modify this dysfunctional system in the brain. This is the crucial question in the field at the moment, and with generous funding from the Dworman Foundation we are poised to answer that question.

With these background findings on the nature of borderline pathology and its treatment, the present study is designed to examine the process of change in affect regulation and modulation through a one year course of TFP.  We will examine both the effects of TFP on patients and the influence of specific patient personality variables (such as extent of negative affect and constraint) on the levels of change (psychological, neurocognitive, somatosensory, neural circuitry) in TFP. We expect that the careful examination of the patient’s cognitive and affective responses to interpersonal relations (both with the therapist and others in the current life of the patient) will lead to: 1) reduction in negative affect, 2) increase in affect regulation/modulation including changes in the neural correlates of modulation, 3) increase in reflective capacities in representations of self and others, and 4) some improvement in social and work relations.

After our randomized control study, we engaged in the next level of our research. This present study, with a small number of subjects and one year of treatment, is conceptualized as a pilot study leading to a major subsequent study with a larger number of subjects and longer (e.g., two years) treatment which is more likely to result in significant changes not only in symptoms but also in social functioning. Our long-term goal is to demonstrate that TFP helps the BPD patient achieve higher levels of functioning in love relations and friendships, and also in work and productive activity. This goal cannot be achieved in the present study as such changes only come about in TFP longer than one year in duration. The results of the present study will provide pilot data on instruments, especially those for social functioning and mechanisms of change, and new information on neural correlates of change from fMRI readings.

Clinical Training and Development of an International Team

Under the leadership of our director of training, Dr. Frank Yeomans, our group has furthered the expertise of clinicians in the United States, Canada, Europe, and Latin America by providing workshops, conference presentations, and internet supervision. We have fostered clinical sites in Vienna, Austria; Munich and Berlin, Germany; Parma and Milan, Italy; Amsterdam, Leiden, Maastricht, and Rotterdam, the Netherlands; Santiago, Chile; Quebec City and Montreal, Canada; Mexico City; Switzerland; Manchester and London, the United Kingdom; and Barcelona, Spain. We have established important links with researchers in certain of these sites (Munich, Vienna, Quebec, Mexico City) in order to foster co-operation and consultation on projects that will further our understanding of borderline pathology and how to treat it.

Our colleagues in Munich and Vienna have carried out a major research project that has added to our understanding of BPD and how to effectively treatment (Doering, et al).

Colleagues we are currently training at the Mexican Psychiatric Institute are working with us in designing research.

Members of our Research Team

Analysis of data from the Weill Cornell PDI RCT found that, among the treatments that were studied, only TFP was associated with change in fundamental psychological process such as reflective functioning and internal working model of attachment:
Levy KN, Meehan KB, Kelly, KM, et al: Change in attachment patterns and reflective function in a randomized control trial of transference-focused psychotherapy for borderline personality disorder. Journal of Consulting and Clinical Psychology, 74(6):1027-1040, 2006.

Hint: To find particular authors, publications or topics on this page, use the "Edit Find" feature of your browser, accessible using Control F (Ctrl+F) on a PC or Command F (Cmd + F) on a Mac. Type the desired word and then hit Next or Previous as needed.